On Friday, Apple TV+ released a new ad campaign starring the Oscar nominee, 27, as he watches a variety of the streaming service’s most popular and award-winning releases in recent years — and ponders why he hasn’t landed a role there yet.

“I was in two Best Picture nominees last year,” the Dune actor says as he and a friend are shown watching Academy Award-winner CODA in a movie theater.

Later, Chalamet is shown scrolling through Jennifer Lawrence‘s movie Causeway and Selena Gomez’s documentary Selena Gomez: My Mind & Me on an iPad as his car drives by adoring fans, forcing him to wonder why he does not have his own doc on the platform.

The ad also shows the actor considering a turn to television roles as he affirms he could star in Apple TV+’s recent hits Ted Lasso, Severance and Black Bird: “I guess I could do prison,” he says.

Chalamet’s Dune costar Jason Momoa later FaceTimes in for the new spot as he says he finished production on his own Apple TV+ series Chief of Warforcing Chalamet to realize seemingly every star in Hollywood has a role on the streaming service except him.

“Wait, you have a new Apple show?” Chalamet asks Momoa, who replies, “At this point, who doesn’t?”

“Yeah, I mean, who doesn’t at this point? Like you just said…” Chalamet replies.

The ad ends as Chalamet realizes Apple has even recruited film legends Martin Scorsese, Robert De Niro and Chalamet’s own mentor Leonardo DiCaprio for the upcoming movie Killers of the Flowerleading the Bones and All actor to request the company calls him as he rolls over onto his bed.

Back in January 2022, the streaming service rolled out a similar ad campaign starring Jon Hamm as he, too, questions why Apple TV+ had not yet recruited him for a role. Hamm, 51, has since landed a role on the upcoming third season of The Morning Showalongside Reese Witherspoon and Jennifer Aniston. 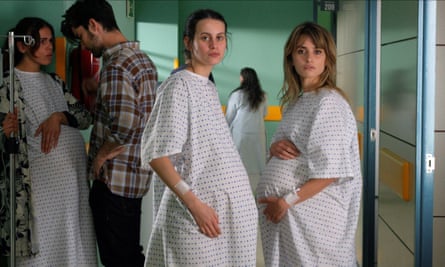 Alec Baldwin Will Be Charged With Involuntary Manslaughter in ‘Rust’ Killing